Hallett Cove School is a health Promoting School and we take a strong stance against drug use. It is important that our school community is aware that there will be serious consequences for any student involved with illegal drugs, solvents, tobacco or alcohol while on the school premises, while on a school excursion or when representing the school (Representing the school also includes anytime in school uniform such as going to and from school). Our policy has been developed from the principles of the ‘DECD Drug Strategy – Intervention Matters’ which includes drug prevention via explicit teaching of the Health Education curriculum, open communication with parents and families and counselling strategies to support students to be successful during their return to school life.

Consequences for Involvement with Illegal Drugs:

In all cases parents/caregivers are contacted and asked to collect their son/daughter. Students will be suspended, or may be excluded, and are expected to meet strict re-entry conditions before returning to school. The police will also be informed and will be involved. Students will also be monitored, counselled and supported during their transition back into school.

Other non-illegal drugs include prescription drugs, painkillers (such as panadol) and other "over the counter" medications. Parents are asked to negotiate a medical plan with our first aid staff who will store medications in a locked facility and dispense them according to the medical plan. There will be consequences for students in possession of non-illegal drugs.

Also, while there are currently no consequences outside our normal behaviour management plan, we discourage students from drinking caffeine based soft drinks. These drinks are marketed as energy drinks and are now widely available. The health issues associated with caffeine based soft drinks are sleep disruption, loss of appetite, and hyperactivity that may affect concentration, behaviour and performance in class.

For a First Offence:

For a Second Offence:

For a Third Offence:

Identification of Drug Use

Each instance of drug possession will be treated individually and independently depending on the circumstances at the time and the individuals concerned.

Staff have responsibilities for the health, welfare and safety of the students in their care. The following procedures should be followed if a teacher suspects there has been some form of drug abuse:

We are in the process of clearing out excess furniture from storage in preparation for our Building
Better Schools Project.  If you are interested in purchasing any of the items listed please complete the tender form attached. 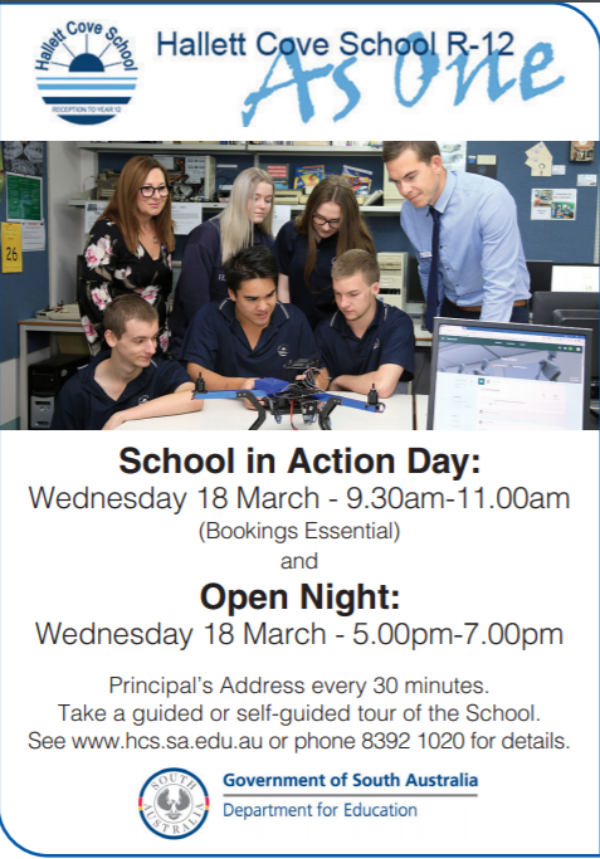 The Hallett Cove School Open Day will be held on Wednesday 18 March.  There will be a 'School in Action" morning 9:30 - 11am.  Bookings are essential for this as numbers are limited for the tour, it will include viewing students at work.

The Open Evening will also be held on Wednesday 18 March , 5-7pm.  You can join a tour at anytime during the evening with the last tour finishing at 7pm.